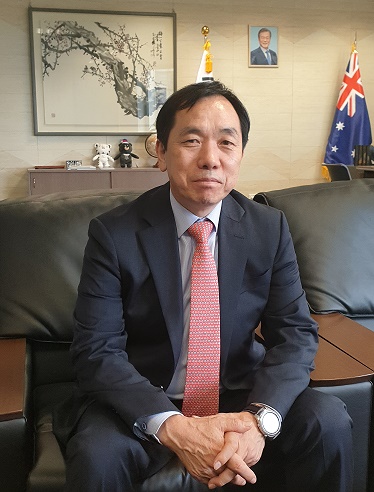 Opened in 2012, the Consulate-General is in charge of the Victoria region where Melbourne is located as a state capital in Australia's second largest.

The total volume of trade between Korea and Victoria reaches to $3.2 billion and Korea is the eighth-largest trading partner of the state. Both nations are actively engaged in economic exchanges in various areas, including; automobiles, crude oil and oil refining, food and pharmaceuticals; also investment is gradually expanding.

As one of the world’s most livable cities, Melbourne is a cultural, educational and sports hub, and about 25,000 people of Korean community has formed and involved in a lot of activities in Victoria's multicultural society. In particular, sports exchanges have been expanding since Geelong-Korea Baseball team established in Australian Baseball League last year.

The Consulate-General of the Republic of Korea in Melbourne will eager to extend a friendship between Korea and Victoria and promote bilateral exchanges. In addition the consulate will do the best to make more efforts in friendly and speedy consular service, protect the security of Korean nationals in the region, and to promote the rights and interests of the Korean Community in Victoria.