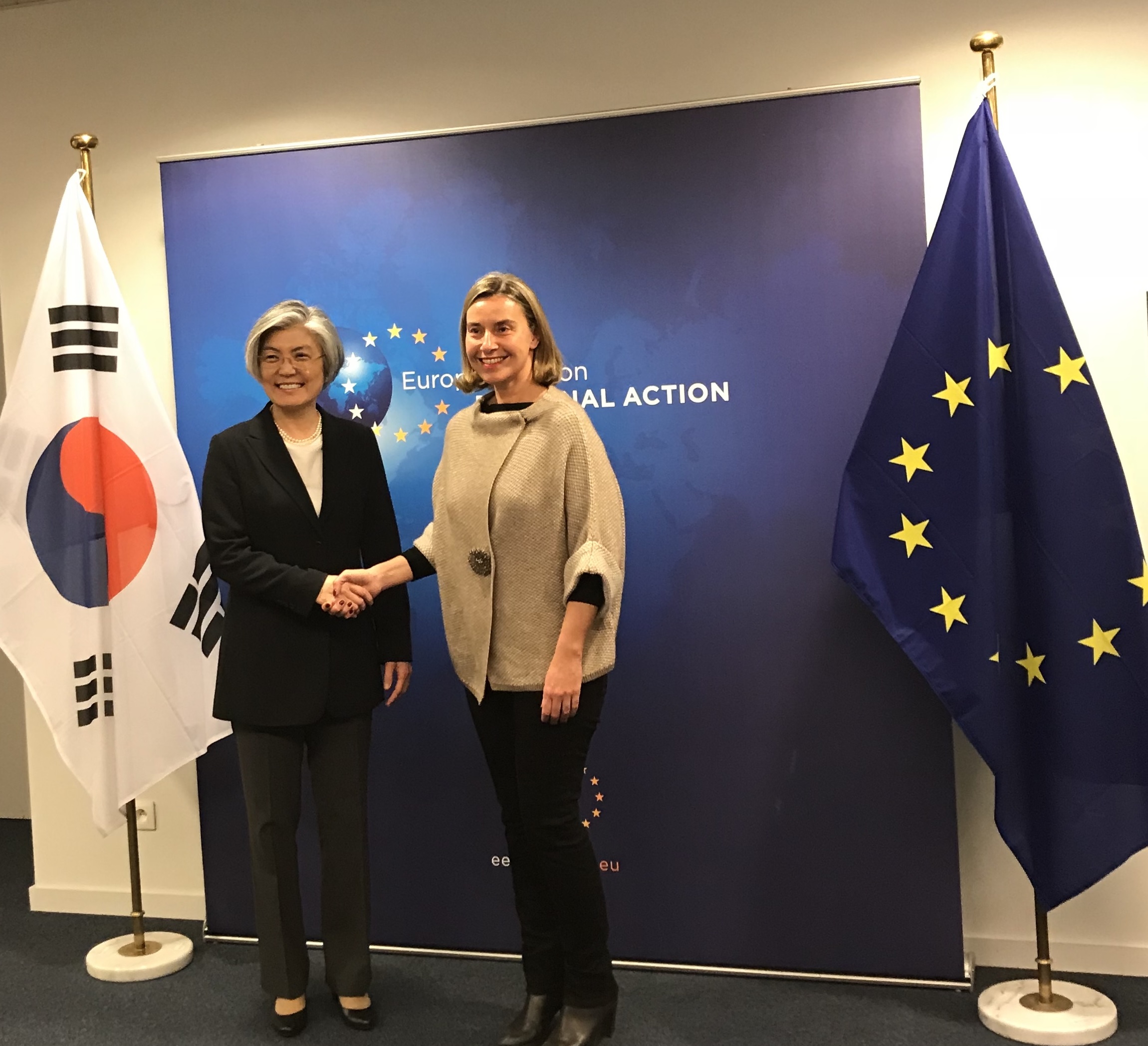 Celebrating the 55th anniversary of the establishment of diplomatic relations between Korea and the EU.

2018 is significant as it marks the 55th anniversary of the establishment of diplomatic relations between Korea and the EU. Over the past half century, Korea and the EU have cooperated successfully as strategic partners on areas of mutual interest such as the situation on the Korean Peninsula and beyond as well as issues of common concern in Europe and the international community.

Korea is the first partner to have concluded agreements with the EU in the areas of political, economic and security cooperation: namely, a Framework Agreement, a Free Trade Agreement and a Framework Participation Agreement in the Crisis Management, respectively. Building on the adoption of this set of landmark legal agreements, Korea has been steadily developing comprehensive and dynamic relations with the EU.

The EU has supported with great interest the peace and stability on the Korean Peninsula. The EU’s contribution has been evident in numerous engagements, including its accession to the Korean Peninsula Energy Development Organization (KEDO) as a member of the Executive Board.

The EU has continued to uphold its “critical engagement” policy with North Korea, which is basically in line with Korea’s inter-Korean policy. The EU has continuously criticized provocations by North Korea whilst encouraging the consolidation of peace on the Korean Peninsula through dialogue.

Recently, the EU invited for the first time Foreign Minister Kang Kyung-wha of Korea to its Foreign Affairs Council working luncheon where the Korean Foreign Minister and her counterparts in the EU exchanged perspectives on the situation on the Korean Peninsula and views for cooperation on this issue. The collaboration in the EU’s Foreign Affairs Council meeting attests to the EU’s continued commitment to securing peace on the Korean Peninsula.

It is also remarkable that Korea is closely collaborating with the EU in regional and global security fields. Korea and the EU are working together to protect the safety of Korean and EU vessels off the coast of Somalia. The Cheonghae Naval Unit of the Korean Navy is participating in the EU’s Operation Atalanta in this regard.

Commemorative events and programmes for 2018

The Korean Mission to the EU is holding various events and programmes in and around Brussels, the heart of Europe, in special commemoration of the 55-year-old diplomatic relationship with the EU.

In March, the Korean Cultural Center, the cultural exchange arm of the Korean Mission, held a Ceramic Exhibition by Mr. Lee Young Jae where 55 pieces of ceramics were displayed symbolizing the 55th anniversary.

On March 27, the National Gukak Center of Korea performed traditional court music at the Royal Conservatory of Music of Belgium to share Korea’s rich and long-standing musical heritage with Belgian and European citizens.

In May, the Korean Mission is preparing many more diverse programs in celebration of Europe Day on May 9, which is to honor the spirit of EU peace and unity. Europe Day will be a symbolic time of the year for showcasing the 55-year-old partnership between Korea and the EU.

On the same day, Korean and European architects will hold an Architecture Exhibition “Beyond Boundaries” in Brussels and Bruges, which will contribute to the promotion of exchanges in the cultural and artistic field.

The Korean Cultural Center will host a Classical Music Week from May 22 through May 25. The Music Week will invite Korean and European musicians on the occasion of the Queen Elisabeth Competition, which is one of the world’s three most prominent musical competitions. It will be a week-long festival where musical exchanges will be presented in conjunction with the promotion of partnership.

On June 12, the Korea Foundation - Free University of Brussels (KF-VUB) Korea Chair will convene a conference to recommend academic inputs to the preparation of the upcoming Brussels ASEM Summit in October. The Conference will also explore innovative ideas aimed at finding ways of how the Korea-EU partnership can contribute to further developing ASEM process. The KF-VUB Korea Chair is the first specialized hub of academic and policy research of Korea studies.

In October through the end of the year, BOZAR plans to hold an exhibition of digital arts in commemoration of the ASEM Summit. The Exhibition will present a rich pool of artistic and cultural exchanges between Korea and the EU.

The Korean Mission and the Korean Government will exert its best efforts to broaden and deepen the already strong partnership between Korea and the EU and to achieve win-win successes that will lead to a virtuous circle of mutual benefits.

We look forward to the continued interest and support of the Korean and European people in this regard. We will continue to do our best to reflect and accommodate their comments and advice in our activities and policy formulations. Thank you very much.