The Korean zodiac is a classification scheme based on the lunar calendar  and itsorigin can be traced back to ancient China. Year 2021 is known as the Year of the Metal Ox, and it lasts from February 12, 2021 until January 31, 2022. The zodiacs in western astrology and Chinese astrology are different, and  follow different systems. This is quite interesting, and in Korea, some are very engaged with their zodiacs and what fortunetellers have to tell them about their future according to their birth year, zodiac animal, and more. Thus, a question you might hear among Koreans is “What’s your Ddi?”, which roughly translates to “What is your sign?”. What are Korean zodiacs and this ‘ddi’?

Ddi
The Korean zodiac has its roots from ancient China. Each zodiac animal, called Ddi (띠), refers to the year you were born, and also a set of characteristics that you might possess. For instance, if you were born in the year of the tiger, you would be a tiger ddi, or horangi ddi (호랑이 띠) in Korean. Those who are especially interested in zodiacs and astrology will try to guess your compatibility through your ddi using horoscopes and such, but most use it for fun and to guess your age. One can figure out your age by knowing your ddi, as each animal has its own year every twelfth year, in accordance with the 12-year cycle of animals that follows the lunar calendar. 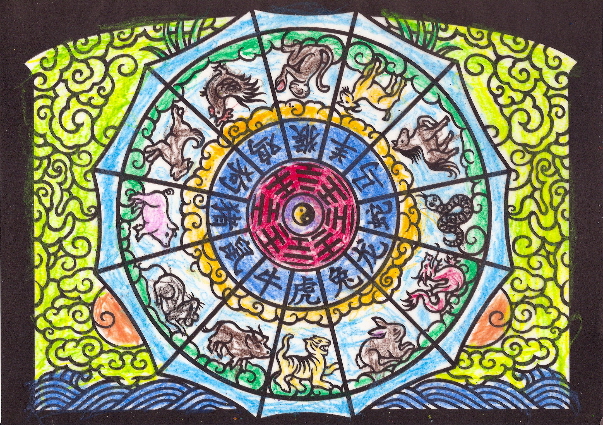 The Animals
There are 12 animals in the Korean Zodiac. These are:
Rat, Ox, Tiger, Rabbit, Dragon, Snake, Horse, Sheep, Monkey, Rooster, Dog and Pig.
As mentioned earlier, the year of an animal repeats every twelve years, and it follows the order of the animals listed above. According to Chinese astrology, each animal has its own specific characteristics, and it is believed that the people born in that year share these characteristics.

It is important to remember that the year of the animals follows the Lunar calendar, as someone who is born in January 2000 would be a rabbit instead of a dragon, as the Lunar New Year in year 2000 was on the 4th of February.

The 12-year and 60-year cycle
The 12-year cycle has each of its animals from the Twelve Earthly Branches (Shibiji (십이지) or Jiji (지지)). The ancient Chinese, and also other East-Asian countries, used this system to denote time in years, months and days together with another system called the Ten Heavenly Stems (Shibgan (십간) or Cheongan (천간)).

The combination of one of the Ten Heavenly Stems, and one of the Twelve Earthly Branches, in that order, are called Ganji (간지), and are used to  give name to years. Each heavenly stem is also associated with a phase, and that stem that is used together with a name of an animal to determine the name of the year. It is worth mentioning that a name for the year in Chinese characters also exists. For example, the year of the Wood Rat would be called Gab-Ja (갑자, 甲鼠). This was much more relevant in the past, as Koreans would use this to date historical events.
This is the reason why 2020 is called the Year of the Metal Rat, and 2021 will be called Year of the Metal Ox (People usually simplify the name of the year by just naming the animal).

The year changes every Lunar New Year, which was on the 12th of February in 2021, and each animal is repeated every twelve years. For each year, the heavenly stem and the earthly branch changes, in other words goes to the next stem and branch in the order (see table in separate section). Since there are ten heavenly stems and twelve earthly branches (animals), a combination of a heavenly stem and an animal repeats every 60 years, thus representing a cyclical concept of time. This is why Korea and other Asian countries, regard a person’s 60th birthday as a special event.

Summary
We have seen how the Ten Heavenly Stems together with the Twelve Earthly Branches, or animals, were used to indicated the name of years, and how they are used today. We have also seen how Koreans can ask someone what their ddi is, in other words, what their animal is, and how they can determine age or someone’s year of birth through their ddi.
I have added three tables to this article; one for the ten heavenly stems, one for the twelve earthly branches, and a final one showing the years for each animal since 1948 until 2021. Ddi is only related to the animals in the twelve earthly branches, and the animal name used is  in Korean and not in Hanja. Time to go figure out what your ddi is. 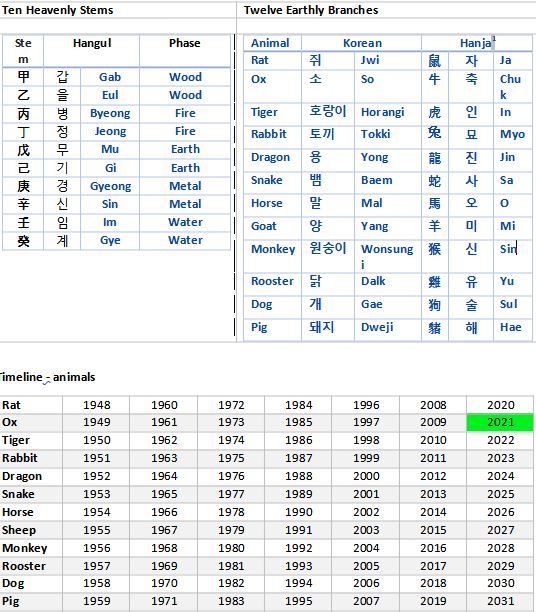