▣ Looking back in History

Over 100 Years of Friendship

Korea-Canada relations date back to 1888, when Canadian missionary James Scarth Gale of Toronto was first sent to Korea. Famous in Korea for his creation of the first Korean-English dictionary, Gale also prepared the first Korean translation of the Christian Bible, and wrote the first substantial English-language history of Korea.

Noted scholar and philanthropist Dr. Oliver Avison was a personal physician to King Gojong and founded the Severance Hospital in Seoul, and the medical college that became Yonsei University.

Dr. Francis Schofield from Guelph, Ontario, became a national hero in Korea for his participation in the 1919 Independence Movement against Japanese colonial rule. Dr. Schofield is the only foreigner to be buried in the patriots' section of the Korea National Cemetery.

Between 1888 and 1941, a total of 184 Canadian missionaries visited Korea. Many made significant contributions – particularly in the fields of education and health – in Korea’s path towards modernization.

Canada in the Korean War

Amongst the UN participating countries in the Korean War (1950-53), Canada dispatched the 3rd largest contingent–a total of 26,791 soldiers; this represented one of Canada's most significant military engagements in the latter half of the 20th century. Sadly, in the end, 516 Canadians died in action; 379 were laid to rest in the UN cemetery located in Busan, Korea.

To commemorate the sacrifices of those who served in the Korean War, a ceremony of remembrance is held every year at the National War Memorial in Ottawa and throughout various cities and towns in Canada. Under the ‘Veterans Revisit Korea Program,’ the Ministry of Patriots and Veterans Affairs regularly invites a select number of Canadian veterans and their families to visit Korea. Similarly, under the ‘Peace Camp for Youth Program’ grandchildren of Korean War Veterans are also invited to visit Korea on a regular basis.

Korea's rapid development, democratic evolution and growing regional and international interests, together with its entry into the United Nations in 1991 and accession to the OECD Development Assistance Committee in 2010 have enhanced co-operation between Korea and Canada in a number of areas such as arms control, disarmament, peacekeeping, and development assistance.

In addition, Korea and Canada share membership in the ASEAN Regional Forum (ARF), the Asia-Pacific Economic Co-operation (APEC) forum, the Organization for Economic Cooperation and Development (OECD), and the World Trade Organization (WTO), amongst others.

The Korea-Canada Free Trade Agreement, Canada’s first FTA in the Asia-Pacific region, and the 11th free trade agreement for Korea, entered into force on January 1, 2015, and represented a landmark achievement for both countries. The FTA has increased bilateral trade in key sectors, such as: automobiles, electronics, energy, forestry, agriculture and the commercial fishing industry. The FTA has also opened new avenues for collaboration, in areas of: pharmaceuticals, rail, steel, aerospace, and cultural exchange and content.

The free trade agreement has fostered innovative partnerships, as well as people-to-people exchanges between the two countries. Korea is the gateway to the Asia-Pacific market for Canada, and Korea’s exports to Canada have greatly expanded.

Prior to the FTA, the Strategic Partnership was established in 2014. The objective was to bolster the Korea-Canada bilateral relationship, through key areas of cooperation, such as: energy, natural resources, science, technology and innovation. It also aimed to strengthen our two countries’ joint commitment to addressing pressing global issues.

In the margins of the Strategic Partnership, the Korea-Canada Science, Technology and Innovation (STI) Agreement entered into force on May 17, 2017. 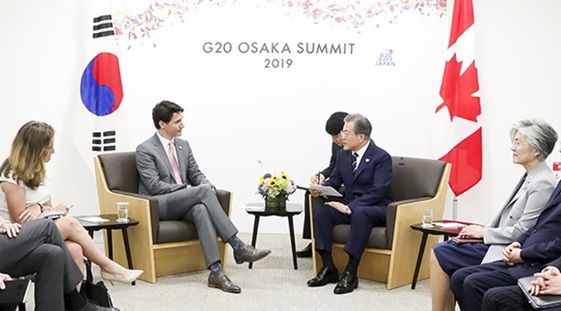 Korea's President Moon Jae-in, and Canada's Prime Minister, Justin Trudeau, met on the sidelines of the G20 Summit in Japan on June 29, 2019. They had in-depth discussions on the accomplishments of the Korea-Canada FTA and the North Korean nuclear issue, as well as matters of mutual interest, such as Artificial Intelligence (AI) research. 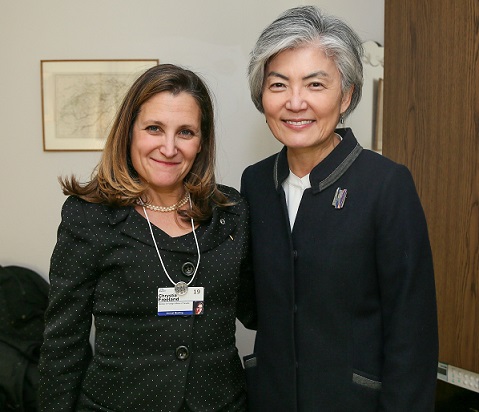 On January 24, 2019, Foreign Minister Kang Kyung-wha met with her Canadian counterpart Chrystia Freeland, on the sidelines of the World Economic Forum in Davos, Switzerland. The two ministers exchanged their views on global issues, including developments in North-east Asia, and on issues of human rights and women.

On August 2, 2019, in Bangkok, Thailand, the two ministers met on the sidelines of the ASEAN Regional Forum (ARF). They discussed regional and international issues, including the Korean Peninsula, the South China Sea and the importance of protecting the rules-based trading system.

As like-minded allies, Korea and Canada share similar views on many global issues and have been close partners in promoting peace and security around the globe.

Canada firmly supports Korea's continuing efforts to improve relations with North Korea and to lessen tensions on the divided peninsula.
﻿
Taking note of the increasing role of both countries in addressing today’s global challenges, both governments are committed to strengthening cooperation in other areas, including: climate change, international development, and Arctic research.

Korea is Canada’s 7th largest merchandise trading partner and the 3rdlargest in Asia, after China and Japan. Average annual trading volume between the two countries surpassed 10 billion USD for the first time in 2011, and has seen robust growth since then.

People-to-people exchanges between Canada and Korea are robust. Approximately 241,000 Canadians of Korean descent reside in Canada, and more than 23,000 Canadians live in Korea. As of 2018, Korea is the 3rd largest country contributing to international students studying in Canada, and more than 636 Canadians went over to Korea as English teachers. Travel and tourism between the two nations is also significant. There were over 440,000 two-way trips between both countries in 2018. In addition, 4,000 Working Holiday visas are issued every year.